by Isabel Schutten | Not part of a category 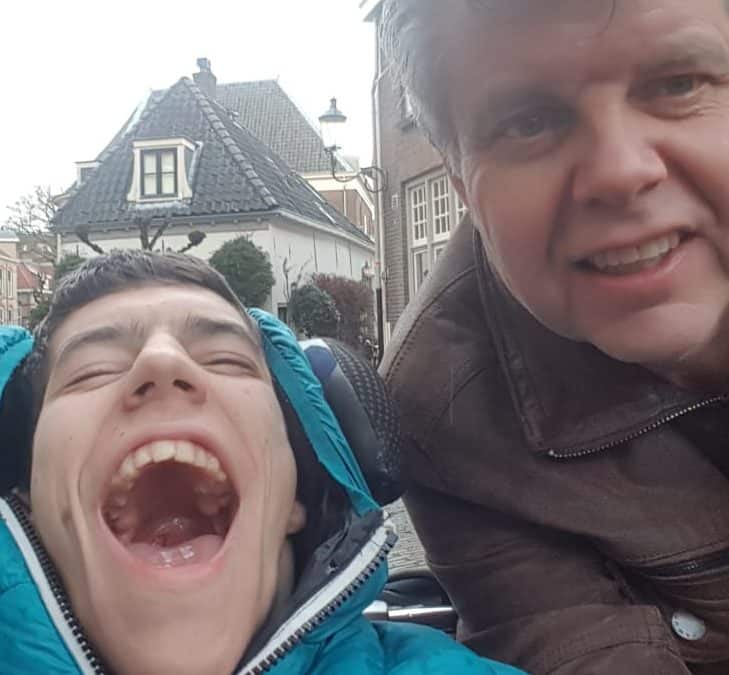 The reason for this proposal is a specific request for help and the subsequent own development process. It’s not about Arie, but about his son. Andrei Fokkink is spastic, cannot speak and cannot use his limbs functionally. As a result, his own wheelchair cannot move, but he dreams of it. How nice would it be if he indicates on his eye-controlled computer on the map where he wants to go and that his wheelchair drives there itself, avoiding obstacles?

How did you experience this project?

“We experienced this project as ‘great’. We had set out the original issue more broadly. After a few weeks, the project group found it difficult to define part of the theme and to carry out an in-depth study. I took the project around the robot out of the stable again three years ago, which had been helped by Saxion students for a bit three years ago, but was left lying there after that.”

“Three years after the first attempt, we now have a real breakthrough: a robot that Andrei can control with his eye-controlled computer. The robot can see with the camera where Andrei cannot see and transfer and retrieve text messages from people elsewhere in the room. With thanks to the multidisciplinary student group at the UT!The follow-up group is now working on making the prototype more robust and making it safe in a use context. This includes refurbishing the robot. The intention is to lay the foundation for the robot’s platform function, various functions can be mounted on which disabled people can be fitted as required. The group is also investigating how such robots can be marketed financially. I think open innovation will play an important role in this.”

How will the outcome of this project be applied?

“The long-term goal is that the use of this robot is a stepping stone towards a self-driving wheelchair. That Andrei can use his eye-controlled computer to indicate on a map where he wants to go and that the wheelchair will drive there itself, obstacles avoiding on the road. If that is possible with a lawnmower, a vacuum cleaner or a Tesla, then it should also be possible with the wheelchair.”

What was it like working on this together with students from Enschede?

“We work with groups of students from very different fields of study. You can clearly see in this: learning processes of how to organize things, insight into what the right questions are, what the right approach is and how you use everyone’s strengths. Seeing people learn is That alone is beautiful!! It is also very nice to see that insight into the question behind the question increases during the process and that students become very motivated.”

What are the future plans for this project?

“The great thing is that we also set out lines with the challenge supervisors for a longer-term collaboration. That is super important for us as challenge providers. We have a social goal and can invest some time and money, but that has to be dosed.”